On October 22, 2020, a federal grand jury indicted six Salinas street gang members, charging them with racketeering, murder, conspiracy to commit murder, and additional firearms and gang-related crimes. The federal indictments were the culmination of a complex 3-year investigation initiated and investigated by Detective Byron Gansen.

Detective Gansen’s investigation revealed that a violent group of Norteno street gang members coordinated and executed missions to hunt and kill rival Sureno street gang members. When they could not find Sureno gang members, they targeted Latino males – often, migrant agriculture Workers. This group was known among themselves as the “Murder Squad.” They orchestrated seven shootings over the course of two years, killing eight people and injuring several others between January 2017 and November 2018. Seven of the eight homicide victims had no known gang affiliation. They were murdered in cold blood for no other reason than they were vulnerable and met the suspects’ criteria for execution.  The remorseless suspects celebrated their murders and operated in a culture where the more “bodies” accumulated, the higher status conferred on that member.

This operation is without question one of the most consequential investigations in the history of the Salinas Police Department. Detective Gansen committed countless hours to surveillance, interviews, and unglamorous detective work. Dismantling this band of killers dramatically reduced the number of homicides in Salinas, reduced the influence of gangs, and bolstered the public’s confidence in ongoing Salinas Police Department and federal law enforcement collaborations.

Detective Gansen worked in collaboration with other Salinas Police detectives, as well as multiple law enforcement entities, including the FBI, Homeland Security Investigations, the Organized Crime Strike Force of the United States Attorney’s Office for the Northern District of California, and the Monterey County District Attorney’s Office and the Monterey County Sheriff’s Department. Throughout the investigation, Detective Gansen was always the “point of the spear.”

The investigation is ongoing, and Detective Gansen continues to work toward prosecution with local, state, and federal partners. To date, Detective Gansen’s investigation has resulted in an additional five suspects in custody on state homicide charges related to the operation and the Murder Squad. In announcing the federal indictments, United States Attorney David L. Anderson stated, “The indictment alleges a pattern of horrific violence. This violence destroys lives. This violence holds our community hostage. In announcing today’s charges, we reaffirm the importance of professional law enforcement. We need professional law enforcement to protect the community where we live and work and raise our families.” Byron Gansen’s investigation is an example of precisely this.

Detective Byron Gansen’s investigation has made a tremendous impact on crime in Salinas and Monterey County. His commitment and sacrifice as a detective reflect the highest standards of his profession and the Salinas Police Department, and he is deserving of the California Peace Officers Association Award of Distinction. 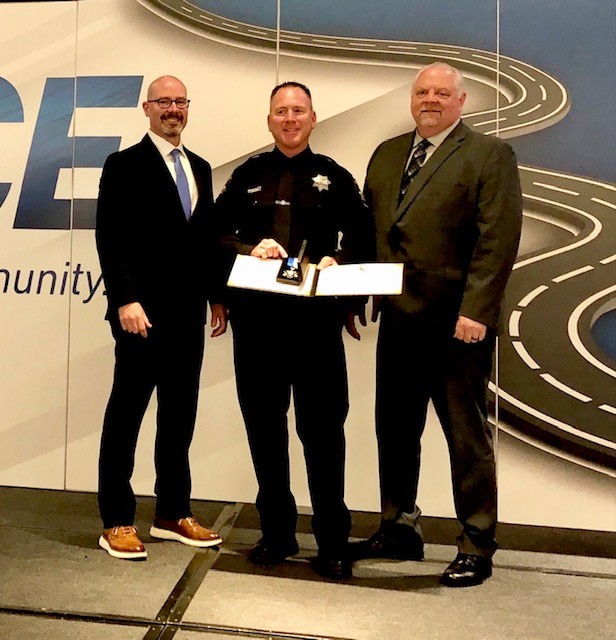