An officer was on patrol on Holly St. when he noticed a 2008 Porsche 911 convertible occupied by one subject. He ran the license plate and learned it was stolen from Hollister. The male who had initially been seated in the vehicle was now walking away. Alexis Barocio, 18, was stopped and taken into custody. He stated an unknown friend let him borrow the car. A second subject, Oscar Mandujano, 18, came out to see what was going on. His vehicle was parked behind the Porsche. Although Mandujano denied any involvement, Officers found a spare key and other property from the Porsche in his vehicle. In addition, he had a warrant for burglary. Both suspects were booked into the Monterey County Jail.

Incident: Hit and Run with Injury

On December 26th at about 1220 hours, a felony hit and run occurred on East Lake Street at Soledad Street in Salinas. The victim, Miguel Angel Lomeli, age 54, was slammed into by an SUV and pinned up against a metal fence post. As of this morning Lomeli is still in being treated in ICU and is in very critical condition. The Salinas Police Department has identified Edward Ramirez, 35, as a suspect in the case. The Police Department is currently looking for Ramirez who is wanted in reference to the hit and run. The investigation showed that the vehicle used in the hit and run was stolen out of Salinas. Ramirez is also wanted in connection with the stolen vehicle case.

Ramirez is described as a Hispanic Male, 35-years-old, 5'9" tall and 160 pounds. He has a tattoo of a bear on his left cheek and a tattoo of the word "Tracy" on his forehead and on his neck. He should be considered armed and dangerous. The Police Department is asking people not to approach Ramirez if he is seen but to call 911.

Attached is a photo of Edward Ramirez, who is the suspect in the felony hit and run which occurred on E. Lake St. and Soledad St. in Salinas on December 26th.  Ramirez is a Hispanic male, 35 years old, 5'9" tall and 160 lbs.  He has a distinct tattoo of a bear on his left cheek and a tattoo of the word "Tracy" on his forehead and neck.  He should be considered armed and dangerous.  The police department is asking people not to approach Ramirez if he is seen, but to call 911. 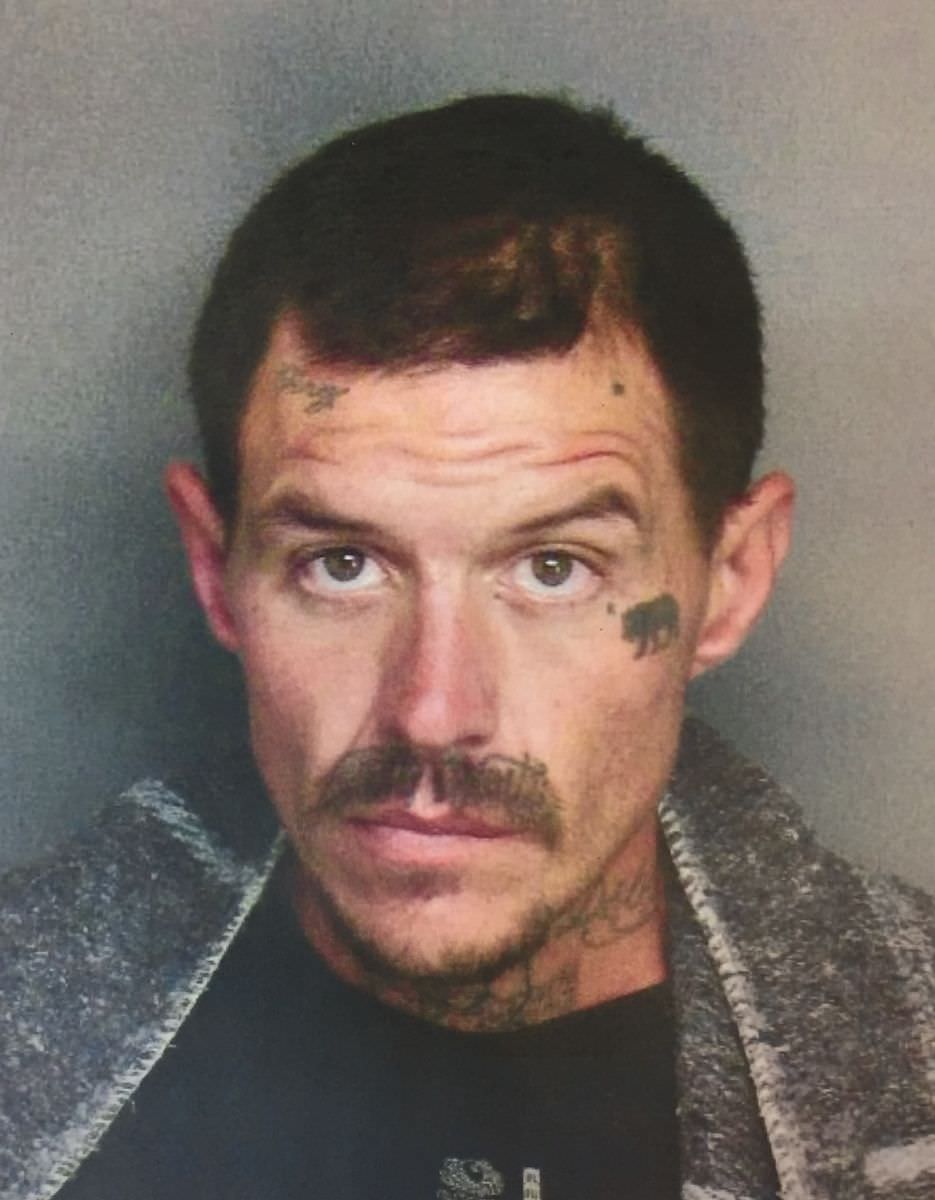 A white Ford Explorer drove n/b on the under 100 block of Soledad St. and parked about mid-block. The driver got out and spoke to a man on the sidewalk for a few minutes. He  reentered the car and left n/b at a high rate of speed. He made a wide right turn as he continued to accelerate onto E. Lake St. The suspect skidded out of control and went up onto the sidewalk narrowly missing the Copacabana building. A 54-year-old male was sitting on a chair next to the building visiting with two friends. The Explorer struck the man and pinned him between the Explorer and a metal fence post. Without even backing the SUV away from the victim, the suspect fled on foot e/b on E. Lake St.  Several people were in the area and pushed the vehicle back away from the victim before providing aid and calling 911. The victim was transported to Natividad Medical Center where he was immediately taken to surgery. He is in very critical condition. The Salinas Policde Department Traffic Unit was called in to investigate. Some of the witnesses came forward and the Department is currently working several leads to identify the suspect.

After 34 years in law enforcement, 28 of those years at the Salinas Police Department, Officer Wayne Vance is retiring.  A final briefing ceremony will be held in the Salinas City Hall Rotunda on Monday, December 29th at 7:30 am.  The media and public are invited to attend.

The Winter Holiday Anti-DUI crackdown has resulted in a significant number of DUI arrests from local routine traffic enforcement and special Avoid the 20 DUI deployments overnight in Monterey and San Benito Counties.

From 12:01 AM Friday December 12, 2014 through Midnight Sunday December 21, 2014 officers representing 20 county law enforcement agencies have arrested 46 individuals for driving under the influence of alcohol or drugs. This is significantly down from the 70 DUI arrests occurring during the same ten (10) day time period last year. 'I am extremely pleased with the reduction in DUI driving this holiday period,” said Salinas PD Sergeant Gerry Ross. 'I'm praying it continues throughout the holidays.”

Fortunately there has been no traffic deaths related to drunk or drugged driving.

Extra DUI Saturation Patrols will be deployed in most of the cities belonging to the Avoid the 20 coalition. The CHP is deploying all available officers for their Maximum Enforcement Period this 2 Day Christmas Holiday Campaign 6:00 PM December 24th through midnight December 25th. All regularly scheduled traffic and patrol officers will focus efforts at stopping and arresting DUI drivers during their normal shifts. DUI/Driver's License Checkpoints, Multi Agency DUI Task Force operations and local Roving DUI patrols are all part of this region-wide crackdown during the 21 day Winter Holiday Campaign. Sergeant Ross advised, 'If you've been drinking and you're thinking about driving, don't do it. With all this extra enforcement you are likely to get arrested.”

Police, Sheriff and the CHP encourage all motorists to help make your community safer: Report Drunk Drivers – Call 911! Funding for this program is provided by a grant from the California Office of Traffic Safety, through the National Highway Traffic Safety Administration. DUI arrest data collection will continue through New Year's Thursday, January 1, 2015.

Fifteen officers conducted a DUI / Driver's License checkpoint for about 5 hours at the above location. 1267 cars passed through the checkpoint and officers contacted 670 drivers. Officers conducted field sobriety tests on 5 drivers and arrested one driver for driving under the influence of drugs. There was one other arrest and two drivers were arrested for outstanding warrants. Twenty four drivers were cited for driving unlicensed and two others were cited for driving on a suspended license. Officers around the checkpoint made 34 traffic stops and cited 11 drivers for hazardous violations.

Funding for this checkpoint is provided to The Salinas Police Department by a grant from the California Office of Traffic Safety, through the National Highway Traffic Safety Administration, reminding everyone to ‘Report Drunk Drivers – Call 9-1-1'.

On today's date between 0800 and 1200 hours, officers conducted a court sting at the Monterey County Courthouse. Officers researched the court calendar ahead of time and found which defendants would be arraigned on charges related to Driving Under the Influence. Officers ran the driver's status on these defendants and found which of them were prohibited from driving. Officers went undercover in the courtrooms and viewed the arraignments. They followed suspended and unlicensed drivers out to their cars. If the defendant got in the car and drove away, the undercover officers would call in the traffic unit to enforce the violations. Two drivers were cited for being suspended or unlicensed. Both drivers had their cars impounded for 30 days.

The under cover officers followed over a dozen other suspended drivers out of the court room but these people made the intelligent decision to walk home or have someone else drive them. The traffic unit conducted a court sting operation at this time last year and seven drivers were cited. "I hope that this reduction shows that the word is getting out and suspended drivers are learning that they better not drive," said Sergeant Gerry Ross. "I was pleasantly surprised that so many people made the right decision not to drive."

Funding for this court sting operation was provided to The Salinas Police Department by a grant from the California Office of Traffic Safety, through the National Highway Traffic Safety Administration, reminding everyone to ‘Report Drunk Driver – Call 9-1-1'

DUI/Drivers License Checkpoint Planned for December 18th. Salinas Police Department Traffic Unit will be conducting a DUI/Drivers License Checkpoint on December 18th, at an undisclosed location within the city limits between the hours of 6:00 p.m. to 2:00 a.m. The deterrent effect of DUI checkpoints is a proven resource in reducing the number of persons killed and injured in alcohol or drug involved crashes. Research shows that crashes involving an impaired driver can be reduced by up to 20 percent when well-publicized DUI checkpoints and proactive DUI patrols are conducted routinely. In California, this deadly crime led to 802 deaths and nearly 24,000 serious injuries in 2012 because someone failed to designate a sober driver. Nationally, the latest data shows nearly 10,000 were killed by an impaired driver. 'Every year in Monterey and San Benito Counties we have several tragic deaths attributed to intoxicated drivers,” said Sergeant Gerry Ross. 'Several hundred more are injured every year. These are senseless tragedies that can easily be avoided.” Officers will be looking for signs of alcohol and/or drug impairment with officers checking drivers for proper licensing delaying motorists only momentarily. When possible, specially trained officers will be available to evaluate those suspected of drug-impaired driving, which now accounts for a growing number of impaired driving crashes. Drugs which may impair driving not only include illegal narcotics, but many prescription drugs, marijuana, and even some over-the-counter medications. DUI Checkpoints are placed in locations based on collision statistics and frequency of DUI arrests affording the greatest opportunity for achieving drunk and drugged driving deterrence. Locations are chosen with safety considerations for the officers and the public. Drivers caught driving impaired can expect the impact of a DUI arrest to include jail time, fines, fees, DUI classes and other expenses that can exceed $10,000 not to mention the embarrassment when friends and family find out. Funding for this checkpoint is provided to The Salinas Police Department by a grant from the California Office of Traffic Safety, through the National Highway Traffic Safety Administration, reminding everyone to ‘Report Drunk Driver – Call 9-1-1'.

Why we do what we do

A note of thanks and gratitude for sending three of your officers, three of your best, to participate in our Grand Fiesta at Closter Park on June 30, 2012. Officers Jeffery Lofton, Richard Lopez and Melanie Coffin were an asset and a huge hit with the kids as well as the parents... they interacted with the kids, always with a smile and a few words of encouragement. The radar race was a great ice...
~ Sandra M. Whittle, Rotary Club of Salinas Alisal
Read More

Question of the Day

My neighbors keep a rooster in their backyard. Is this legal?

No. The Salinas Municipal Code  prohibits any fowl or livestock to be kept as pets. This includes pigs, goats, sheep, chickens, ducks, etc. Roosters are especially bothersome because of the noise they create and the fact they are sometimes used for cockfights and gambling.

How many pets am I allowed to have at my house?

Salinas City residents are allowed to have four pets per household. This includes any combination,...